Senior Inspector Micheal Corravan has been handed a case of a murdered woman found floating in a boat on the Thames river. This case is to take priority and Michael will surely be under scrutiny during the whole investigation. Having to hand off his case of a missing wife, Michael heads the Yard in hopes of a quick solve- which quickly diminishes out of sight when a second and then third woman is found the same way, week after week. He knows these are all connected and yet the clues are eluding him with each woman that is found but he knows he must stop the culprit before another one is murdered.

Corravan has his work cut out for him, not only does he have a serial murderer running around murdering women from prominent families, he has the press hounding his back and constantly dredging up the faults and wrongs of years ago. He needs to solve this to prove they aren’t imbeciles and know what they are doing. Just because one might be a bad apple, doesn’t mean the whole bunch is.

I really enjoyed this novel, and will look to read more by Karen. I enjoyed Inspector Corravan’s character as well as his background the author laid out. He came from nothing and has learned to not judge a book by its cover and does his best to give everyone justice no matter their standing in town. He knows what it is to have nothing and that some days you do everything you can just to make it another day. Thank you to Cooked Lane Publishing and the author for the free book, and the HFVBT for the tour invite! 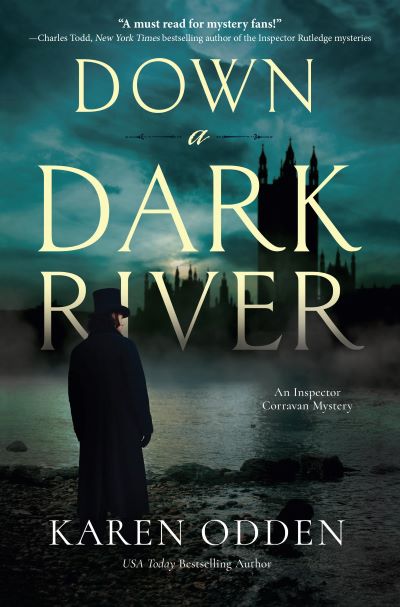 Down a Dark River
by Karen Odden

In the vein of C. S. Harris and Anne Perry, Karen Odden’s mystery introduces Inspector Michael Corravan as he investigates a string of vicious murders that has rocked Victorian London’s upper crust.

London, 1878. One April morning, a small boat bearing a young woman’s corpse floats down the murky waters of the Thames. When the victim is identified as Rose Albert, daughter of a prominent judge, the Scotland Yard director gives the case to Michael Corravan, one of the only Senior Inspectors remaining after a corruption scandal the previous autumn left the division in ruins. Reluctantly, Corravan abandons his ongoing case, a search for the missing wife of a shipping magnate, handing it over to his young colleague, Mr. Stiles.

An Irish former bare-knuckles boxer and dockworker from London’s seedy East End, Corravan has good street sense and an inspector’s knack for digging up clues. But he’s confounded when, a week later, a second woman is found dead in a rowboat, and then a third. The dead women seem to have no connection whatsoever. Meanwhile, Mr. Stiles makes an alarming discovery: the shipping magnate’s missing wife, Mrs. Beckford, may not have fled her house because she was insane, as her husband claims, and Mr. Beckford may not be the successful man of business that he appears to be.

Slowly, it becomes clear that the river murders and the case of Mrs. Beckford may be linked through some terrible act of injustice in the past—for which someone has vowed a brutal vengeance. Now, with the newspapers once again trumpeting the Yard’s failures, Corravan must dredge up the truth—before London devolves into a state of panic and before the killer claims another innocent victim.

Praise for Down a Dark River

“A harrowing tale of unbridled vice that exposes the dark underbelly of Victorian society.”
—Kirkus Reviews

“Odden’s latest is intricately plotted and filled with a cast of wonderful characters, including a worthy and relatable hero.”
—Anna Lee Huber, USA Today bestselling author

“A spellbinding, brilliantly plotted Victorian murder mystery, Karen Odden’s Down a Dark River features a fascinating and relatable detective, a cast of complex characters, powerful prose, exceptional attention to historical detail, and enough twists and turns to keep you on the edge of your seat until the last astonishing page. Highly recommended!”
—Syrie James, bestselling author of The Secret Diaries of Charlotte Bronte

“Sparkling prose, vivid description, a haunting and satisfyingly complex story . . . Down a Dark River is a must read for fans of any genre of crime fiction.”
—Edwin Hill, author of The Secrets We Share

“An original, street-smart detective, an intriguing mystery, and delicious Victorian flavor. All my favorite things!”
—Laura Joh Rowland, author of The Ripper’s Shadow, a Victorian Mystery

“No one does Victorian England like Karen Odden . . . Fans of Anne Perry and Charles Finch will welcome Inspector Michael Corravan.”
—Mariah Fredericks, author of the Jane Prescott mystery series

Karen Odden earned her Ph.D. in English from New York University and subsequently taught literature at the University of Wisconsin-Milwaukee. She has contributed essays to numerous books and journals, written introductions for Victorian novels in the Barnes & Noble classics series, and edited for the journal Victorian Literature and Culture (Cambridge UP). Her previous novels, also set in 1870s London, have won awards for historical fiction and mystery. A member of Mystery Writers of America and Sisters in Crime and the recipient of a grant from the Arizona Commission on the Arts, Karen lives in Arizona with her family and her rescue beagle Rosy.

Friday, November 12
Excerpt at What Is That Book About

Thursday, November 18
Excerpt at I’m All About Books
Review and Excerpt at Older and Smarter

Monday, November 22
Review at Reading is My Remedy

Enter to win a copy of Down a Dark River by Karen Odden!

The giveaway is open to the US only and ends on December 1st. You must be 18 or older to enter.

Down a Dark River
https://widget.gleamjs.io/e.js

One thought on “Down A Dark River by Karen Odden”