When Kathleen’s little sister stalks off in a huff, Grant and Kathleen are caught out in a raging thunderstorm while looking for her. They take refuge in a small cottage to wait it out, and Grant does his best to distract Kathleen from her worries.

He pulled his chair close to hers and sat. Then he wrapped an arm around her shoulders, tucking her against him. She sank into his embrace with a funny little sigh.
“I did almost marry,” he confessed. “When I was young and exceptionally stupid.”
She wriggled sideways to look at his face. The motion pushed her breasts against him, a sensation he thoroughly enjoyed.
“Really? What happened?”
“Graeme and I eloped.”
She choked out a laugh. “I know you and Graeme are exceedingly close, but that seems a bit much.”
He pressed a kiss to the top of her messy curls. “Cheeky lass. I mean we jointly eloped with two young ladies of our acquaintance.”
“Not very successfully, obviously.”
“It was an epic disaster from beginning to end.”
“They why did you do it?”
“It was my grandfather’s idea, so that should tell you something.”
When she tilted her head, her face was so close that he could practically count the freckles that danced across her cheekbones.
“I’ve noticed he’s something of a matchmaker, but that idea seems rather deranged, even for him.”
“When it comes to matchmaking, Angus lets no obstacle stand in his way, including the feelings of the various parties.”
She wrinkled her nose. “How did this all come about?”
“Mostly as a result of our own bad behavior. The family consensus was that at the advanced age of twenty-two, it was time for the terrible twins to grow up. Angus believed that the most expedient path to such a laudable goal was marriage.”
“Did he also pick out the girls for you?”
“I’m happy to say we managed that bit on our own.”
She chuckled. “So much initiative.”
“Angus planned the rest, though. He even came with us to direct the proceedings.”
She jerked upright. “Your grandfather went with you on your elopement? Now you must be joking.”
Grant resettled her under his arm. “Alas, no. Royal also participated in this mad scheme, although his efforts were markedly more successful. He and Ainsley eventually did get married.”
“It sounds a rather crowded affair.”
“It required two overloaded carriages to transport the lot of us from Glasgow to Kinglas.”
“Really, it all sounds insanely complicated. Why didn’t you simply sneak off and get married in Glasgow?”
“Not dramatic enough for a Highlander, ye ken. Besides, Graeme and I feared a concerted resistance from the fathers of our intended brides—not to mention from Nick. So we thought it best to put some distance between us and all of them.” He shook his head. “It was an absurdity from beginning to end.”
She made an impatient noise. “More details, please.”
“Hmm. Well, Royal and Ainsley spent most of the journey yelling at each other, which unnerved the other girls and prompted them to begin having second thoughts. Naturally, this irritated Angus, which led to fairly predictable results.”
“More yelling?”
“Exactly, and an unfortunate degree of name-calling. By the time we reached Kinglas, both girls swore they would rather be boiled in oil than marry a Kendrick. And that was even before the avalanche, and Graeme falling off the carriage and breaking his leg. We capped off this catalogue of disasters by coming down with wretched colds after we reached Kinglas. Suffice it to say that our intended brides were greatly relieved at the failure of our demented plan.”
Kathleen twisted around again to stare up at him. “An avalanche? Really?”
“Really.”
“That’s . . . that’s . . .” She dissolved into laughter.
“Go ahead and laugh,” he said with a dramatic sigh. “Don’t spare my feelings.”
She shook even harder in his arms.
It was hilarious, of course, but also embarrassing. Even thinking about it made him feel like a bottle-headed moron. Yet if it served to distract his sweet lass from her troubles, it was worth it.
“Fortunately, Vicky and Nick caught up with us and quashed any gossip or scandal,” he added. “It was a miracle poor Nick didn’t shoot us for the crime of capital stupidity.”
She giggled before subsiding against him.
Despite the raging storm outside, a quiet contentment settled over them. The peat fire gently hissed, pouring out a comforting heat, and the whisky drove out any lingering chill in his muscles. With Kathleen snuggled in his arms, Grant felt more at peace, more himself, than he had in a very long time.
She stirred, half turning her face into his shoulder.
“Were you sorry you didn’t marry?” Her voice was muffled.
“I was sorry I caused so much trouble.”
“But the young lady . . . did you love her?”
Now she was no longer resting softly in his embrace. Rather, her slender form felt rigid, as if tension had just invaded her limbs.
“I certainly liked her,” he said, “but I’m not ashamed to admit that I mostly felt relief. I was far too stupid to know what I wanted at that point in my life.”
“Do you know what you want now?”
He propped his chin on her head, smiling to himself. “I think so.”
“And do you think you could love me . . . I mean, like me?”
There was a momentary silence before she tried to slide out of his embrace.
“Never mind,” she hastily added. “Silly question. Just forget I asked it.”
Grant gently pulled her back, turning her to face him. Her eyes were huge, her cheeks flushed, and her expression a heart-twisting mix of defiance and self-doubt. Never had he met someone who seemed so confident and yet so unsure—or unaware—of how bloody wonderful she truly was.
He cupped her chin. “Sweet lass, I more than like you.”
Then he bent and captured her lips, determined to show her just how much.

Miss Kathleen Calvert may be the daughter of an Irish aristocrat, but she has no intention of acting like one. All she desires is to return to her family’s estate to raise horses and manage her father’s magnificent gardens. But when a scandal threatens her reputation, her parents order her to a remote Scottish estate, hoping she will finally learn to behave like a proper lady. To make matters worse, her escort is a handsome Highlander who just happens to be the most boring man in all of Scotland…

After a youth of dangerous and wild escapades, Grant Kendrick surprised his family—and himself—by becoming a successful businessman and the most respectable Kendrick brother. But does that matter, when the beautiful and free-spirited Kathleen deems him a stodgy bore? Luckily, he gets the chance to prove her wrong when their carriage is ambushed by thieves. But it will take all his ingenuity to protect the beautiful lass who has stormed her way into his heart—and to convince her that a life with him will be a love-filled adventure… 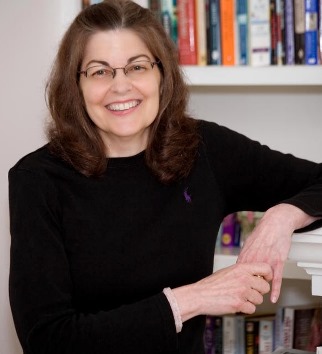 Vanessa Kelly is a USA Today Bestselling, award-winning author who was named by Booklist, the review journal of the American Library Association, as one of the “New Stars of Historical Romance.” Her Regency-set historical romances have been nominated in a number of contests, and she has won multiple awards, including the prestigious Maggie Medallion for Best Historical Romance. Her books have been published in nine languages.

Vanessa’s first Clan Kendrick book, The Highlander Who Protected Me, was a USA Today, Barnes & Noble, and BookScan bestseller. The Highlander’s Christmas Bride, her latest book, hit the top 50 on both the Barnes & Noble mass-market bestseller list and on BookScan. The Renegade Royals Series was a national bestseller, as was The Improper Princesses Series. My Fair Princess was named a Goodreads Romance of the Month and is a USA Today and BookScan bestseller.

When she’s not dreaming of plots for her next Regency novel, Vanessa is writing USA Today Bestselling books with her husband, under the pen name of V.K. Sykes.

You can find Vanessa at vanessakellyauthor.com or at vksykes.com. For all of Vanessa’s latest news and contests–and to receive a free story–please sign up for her newsletter on her website.

Friday, July 30
Excerpt at Reading is My Remedy
Excerpt at Cross My Heart Writing & Reviews

Tuesday, August 3
Review at Michelle the PA Loves to Read

Saturday, August 7
Excerpt at What Is That Book About

Wednesday, August 11
Interview at Passages to the Past

During the Blog Tour, we are giving away a paperback copy of The Highlander’s Christmas Bride & The Highlander’s English Bride & a $20 Amazon Gift Card! To enter, please use the Gleam form below.

The giveaway is open internationally and ends on August 13th. You must be 18 or older to enter. 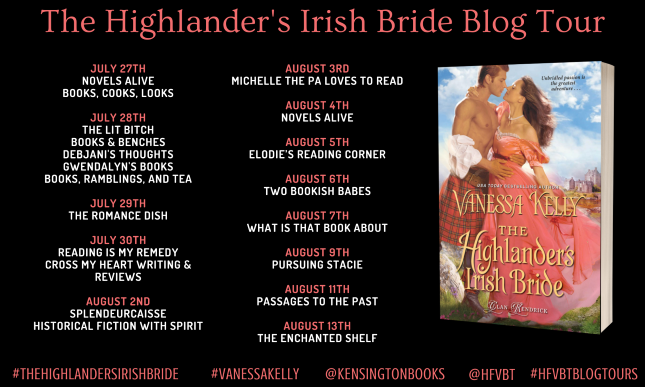 One thought on “The Highlanders Irish Bride by Vanessa Kelly #excerpt”