Another amazing WWII novel, about two women who do everything they can to help try and save others while risking their own lives. Victoria is a polish girl who is sold into slavery by the Nazi’s after they kidnapped her, and Etta a deaf-mute whose mother is embarrassed by her own daughter. Her mother is also a Nazi sympathizer and Etta being disable is not seen as pure.

Victoria was awaiting her chance to go off to college, until that changed with the announcement of war. Somewhat oblivious to what is all happening, Victoria thinks that she will just have to put college on hold a bit, just until after this war but then Poland is invaded and her and her mother endure something worse than a nightmare. She is forced to sew uniforms for the Nazi, meanwhile she adds her own little features to them, in rebellion.

A friend finds out what she is doing, and talks her into meeting up at a resistance meeting. This is for the worse, as the Nazi get wind of this meeting and her and her friend are then sold into slavery as sex slaves. She is sold off to the highest bidder, and this is when a baker buys her, and she meets and befriends Etta. The two work together to stay strong through the abuse of Etta’s mother and do all they can to help the starving polish knowing they are risking their own lives everyday.

The two find strength and kindness in each other to fight the war at home, and the war outside. Etta helps Victoria fight the haunting guilt she still has over her sisters death. She see’s the strength she has considering she is living in fear, in that in Hitler’s eyes she is defective and could very easily be taken to a camp or killed. Meanwhile, Etta is using her artistic abilities to capture what is happening.

Thank you to the author and Mindbuck Media Publicity for the free ebook to read and review. I love historical fiction WWII novels, and this did not disappoint. I had not yet read about the sold sex slaves, or what it was like from the perspective of someone who really was “defective.”

Add to your Goodreads shelf!

The Tattooist of Auschwitz by Heather Morris 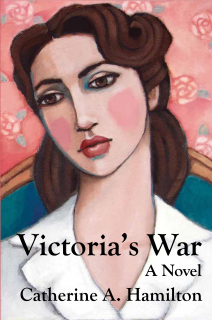 In VICTORIA’S WAR, Hamilton gives voice to the courageous Polish Catholic women who were kidnapped into the real-life Nazi slave labor operation during WWII. Inspired by true stories, this lost chapter of history won’t soon be forgotten.

Her stories and articles have appeared in magazines and newspapers. Her poems were translated and published in Poland by Zeszyty Karmelitanskie. These poems were also seen in the Catholic Sentinel.

She has a chapter in Forgotten Survivors (University Press of Kansas, 2004)—an eyewitness account of Poland during World War II.

She was fortunate to meet Pope John Paul II in his private library in 2000 and presented him with some of her work.

A native Oregonian of Polish decent, Catherine Hamilton lives in Portland with her husband.